Selecting a source and target language

In the start window there is a button Translation for opening the translation window that is shown below: 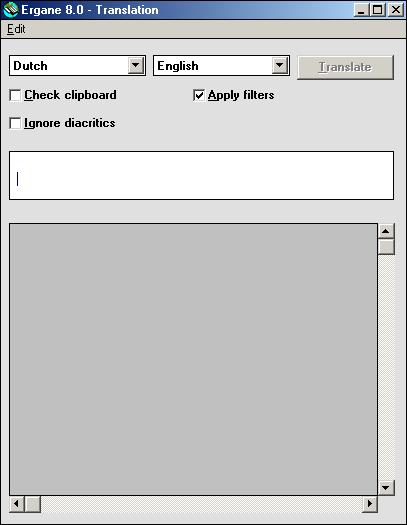 With the backspace key you can delete letters to the right of the cursor. If you want to delete the entire word at once you press the delete key. Instead of pressing the delete key you can also delete a word in the input box by selecting the option Delete in the menu Edit.

Words are translated by entering them in the input box and pressing the enter key or clicking on the button Translate.

For instance, with Dutch as source language and English as target language, you might get the following result: 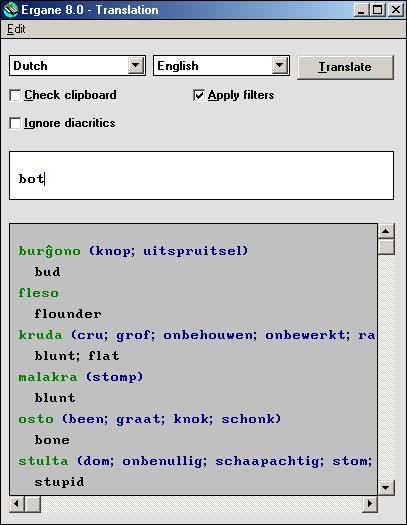 With the checkbox on the right filters can be switched on or off that are used by Ergane to increase the accuracy of the translations. When in the previous example the filters are switched off, more translations of bot will be given. In that case Ergane will give every possible translation of the Esperanto words without caring whether they are also good translations of the word in the source language: 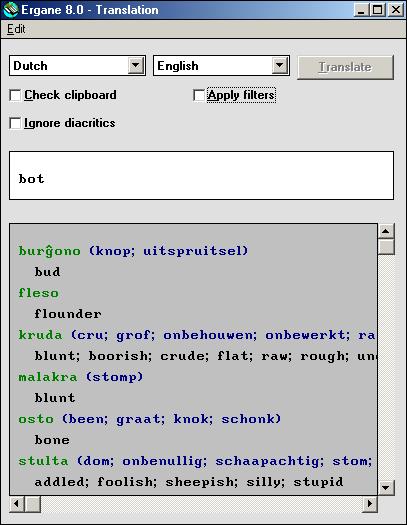 You can also enter words from within another application, provided that it has the possibility to copy words to the clipboard of Windows. You can for instance select a word in a text processor, as shown in the next example:

If the box Check clipboard in Ergane is checked the selected word will automatically be translated immediately after you have copied it to the clipboard: 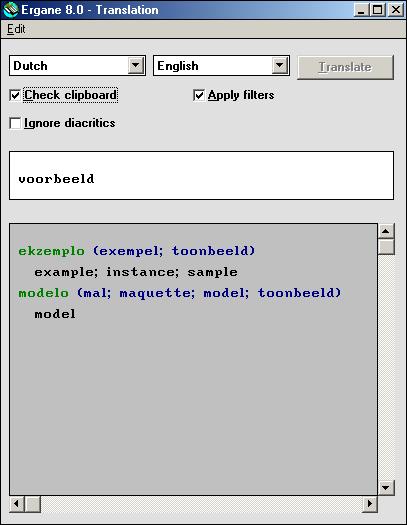 In the wordlists only one spelling is used for each word, which is in principle the spelling that must be used when you enter a word that is to be translated. However, the database contains lists with alternative spellings so that a word may be translated even though it is spelt differently in the wordlist. In that case the spelling of the entered word is automatically changed before it is translated.

Especially in English it is difficult to determine how a compound word must be written. Is it for instance airconditioning, air-conditioning or air conditioning? In Ergane this is not a problem, because spaces and hyphens are ignored when a word is looked up.

Likewise the difference between upper and lower case letters is unimportant, unless this difference signifies a difference in meaning, as in English Polish and polish.

As in the case of upper and lower case letters differences between letters that only differ with regard to diacritics are unimportant to Ergane, unless this difference involves a difference in meaning. The English (originally French) word café can therefore also be entered as cafe. Ergane itself will then add the accent mark. However, if you want to translate English resumé you will have to add the accent mark yourself, because the word resume also exists.

Take into account that it is language dependent whether something is considered a base letter or a letter with a diacritic. You can for example enter the word ångström (an obsolete unit of length in physics, named after the Swedish physicist Ångström) as angstrom without problems in English, but in Swedish you cannot do this because in this language both å and ö are considered base letters.

In some languages diacritics are only used when there is a chance of a word being interpreted incorrectly. For instance, in Yoruba a syllable can be pronounced with three different tones. The tone can be indicated with an acute accent, a grave accent or the absence of an accent mark. Generally the context is sufficient for readers who speak Yoruba fluently to determine the proper tone and with that the meaning of a word, so tone marks are rarely used. But for those who do not speak the language well enough this would make it more difficult to find the meaning of a Yoruba word with Ergane, that is, if the check box "Ignore diacritics" were not there to help you.

As mentioned earlier Ergane ignores diacritics unless the presence or absence of diacritics is important for the meaning. However, when the above-mentioned checkbox is checked this restriction does not apply anymore. If we for instance want to translate English resume with this checkbox checked then Ergane will assume that also resumé could be meant. As the result of this assumption the following window is then displayed in which the user can indicate whether he want to have resume or resumé translated. 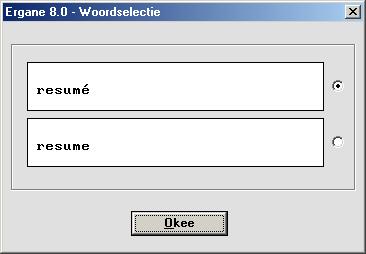 Sometimes it is necessary to add more than one diacritic to a base character. The Greek letter iota for instance can get both a tonos and a diaeresis. In such a case it does not matter in which order you add the diacritics. 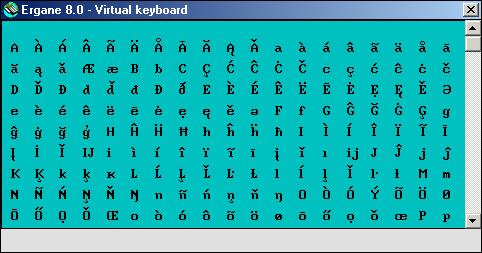