When Ergane is started for the first time a window appears in which the text of the user licence is shown. After this window has been closed the start window is opened:

Ergane's start window contains only one button, with which the translation window is opened. In Astraea which offers more features, this window contains several buttons.

Ergane's user interface is available in four languages: Dutch, Esperanto, English and Spanish (though this manual is only available in the first three languages). The first time you use the application Esperanto will be selected as user language. You can choose another by opening the menu Alghustigoj (Settings). After that you open the sub menu Uzantlingvo (User language) with which you select the desired user language, for example angla. The user language then becomes English:

For writing some languages you may need characters for which no keys are present on your keyboard. To solve this problem Ergane has the possibility to replace the characters generated by the keyboard by other characters.

To define keyboard characters that must be replaced you choose Keyboard from the menu Settings. This causes the keyboard configuration window to open: 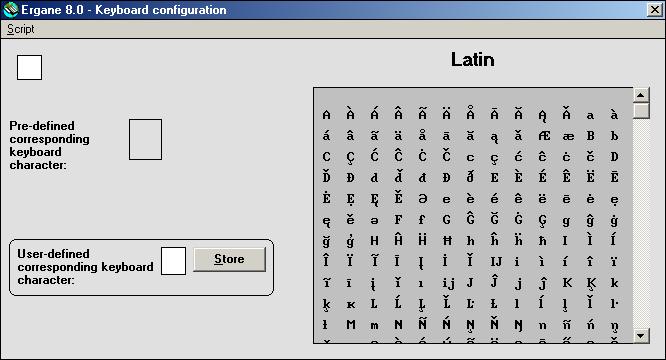 The keyboard is configured for each separate script. In Ergane 8.0 these are the Latin, Greek, Cyrillic and Thai scripts. You select another script by opening the menu Script and clicking on the name of a script, for example the Greek script: 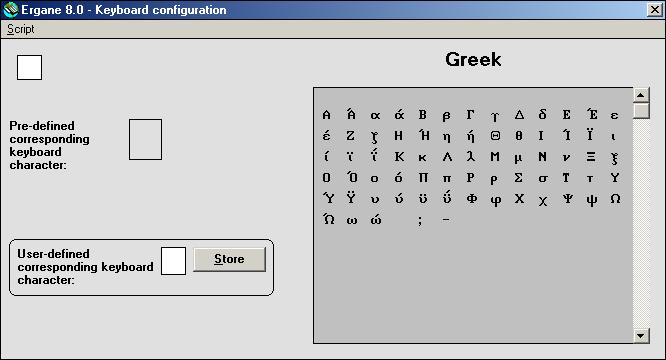 When you click with the mouse on a character in the character table that character will be shown in the keyboard configuration window with its code number and name according to the Unicode standard. The next picture shows the window after a user has clicked on the Greek capital letter beta. 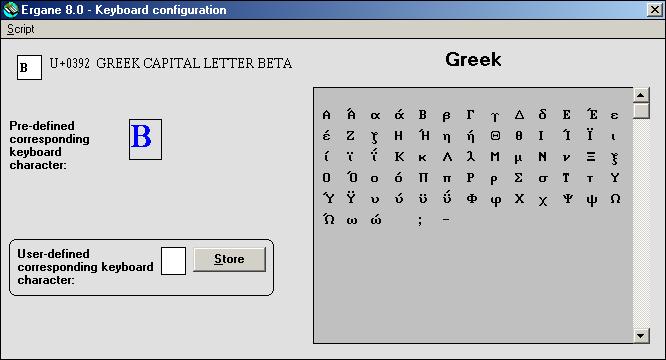 You will see in this picture that a pre-defined character is shown, namely the Latin capital letter B. That means that by default a B that is typed will be replaced by a capital letter beta.

When you want define a character yourself that should be converted you type that character in the input box marked with User-defined corresponding keyboard character. For instance, if you want that not B but V instead is changed into a Greek beta because this better fits its pronunciation in modern Greek, you fill in a V, after which you click on the button Store. 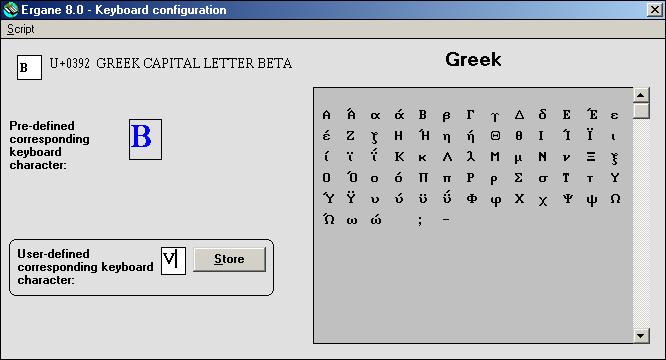 It is not absolutely necessary to define a conversion character for every character that you need. Firstly Ergane has a virtual keyboard that enables you to add with a mouse-click any desired character to a text. In the second place many diacritics (for example diaereses and accents) can be added to a base character with a control key combination. Thus you can for instance make a õ by pressing CTRL-T after the o-key. A large number of control key combinations has been defined for adding diacritics.

With the option User manual in the menu Help (or with the key F1) you can start the browser with the first page of this manual as its start page. With the option About Ergane you can open a new window with in it the version data of the application and a link to the website of Majstro Aplikaĵoj: 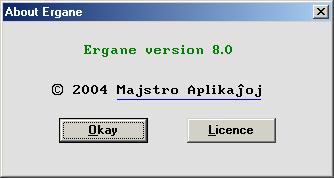 In this window next to the button Okay for closing the window there is a button Licence. If you click on it a window is opened in which the licence for Ergane is shown: 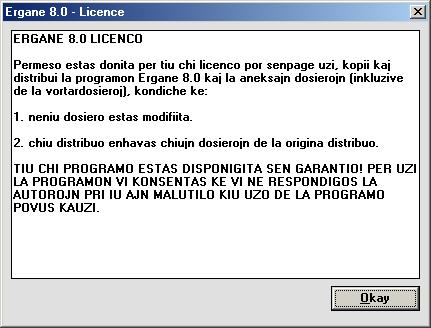